By calhouns on February 7, 2018 in Publication, Resource 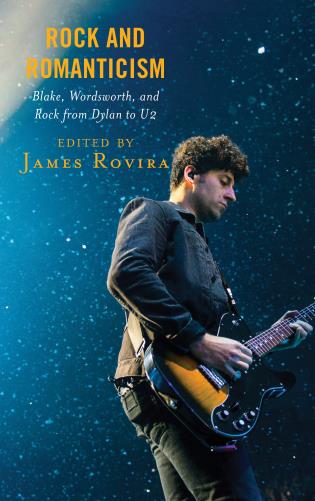 A new academic essay on U2 titled “‘Tangle of Matter and Ghost’: U2, Leonard Cohen, and Blakean Romanticism,” by Lisa Plummer Crafton, Professor of English, University of West Georgia, appears this month in the new anthology Rock and Romanticism: Blake, Wordsworth, and Rock from Dylan to U2 (Lexington Books, 2018), edited by James Rovira, chair and associate professor in the English department at Mississippi College.

Rovira’s website for the book is a sort of launching point for “scholarship with a soundtrack,” with links to chapter summaries and an iTunes playlist for each of the eleven studies in the anthology.

He summarizes Crafton’s essay this way:

“‘Tangle of Matter and Ghost’: U2, Leonard Cohen, and Blakean Romanticism,” triangulates Blake’s, Cohen’s, and U2’s songwriting to illustrate how each artist represents, responds to, and addresses different life stages as they engage themes such as ‘social and cultural protest, the conflation of erotic/spiritual love, and the representation of the rupture of that symbiosis, especially in the poetic treatment of Judas, Yahweh, and Jesus.’ Life stage writing, therefore, is demonstrated in Crafton’s chapter to be a vehicle for sociopolitical critique. Critique is simultaneously and alternatively inwardly and outwardly directed: politics are the outward manifestation of inwardly present ‘mind-forg’d manacles’ and the external force forging those manacles from the start. Blake’s answer to this quandary, a Romantic response repeated by Leornard Cohen and then by U2 through both Blake and Cohen, is to address the mind first through imaginative vision.

The songs Rovira and Crafton suggest listening to are:

Crafton’s essay is the only chapter in the anthology about U2, but fans and scholars of popular music and Romanticism will surely find the entire book stimulating reading.

Rock and Romanticism: Blake, Wordsworth, and Rock from Dylan to U2, appears in Lexington Books’ On The Record series, edited by Scott D. Calhoun, Cedarville University, and Christopher Endrinal, Florida Gulf Coast University. It is available starting February 15, 2018, from the publisher and Amazon.

Andy Rowen & Steve Stockman @ The U2 Conference 2018
U2 and the Religious Impulse: Take Me Higher – A New Collection of U2 Studies Available Now