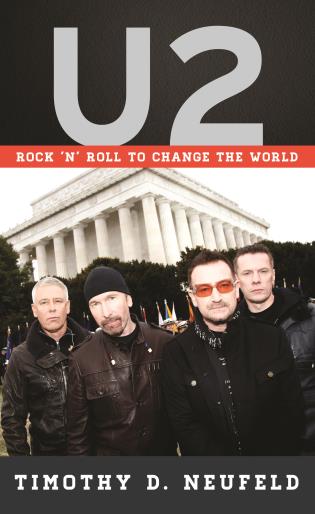 In the forty-plus years of U2, many people have written about the band (including the band members themselves). Through all of that prose a familiar biographical story has taken shape. No matter the storyteller, certain key moments are always highlighted: Larry’s notice pinned to the bulletin board at Mt. Temple Comprehensive School in 1976; three of the band members’ connection to, and eventual departure from, the Shalom community; changes in U2’s sound on The Unforgettable Fire; international superstardom by the time of The Joshua Tree; dreaming it all up again for Achtung Baby; political activism. There’s a comfort in hearing that story rehearsed every so often – especially as the band continues to inspire appreciative devotion from its fans with each new tour, album, or bit of news. For their fans, U2 is a kind of family and hearing all the old family stories makes for a good time.

Tim Neufeld’s U2: Rock ‘n’ Roll to Change the World is the most recent book to take us through the story. If you have followed U2 for a while, you probably know the story pretty well by now. Neufeld’s book really isn’t for you.  It’s a solid introduction to the band but it offers only a little for the die-hards. After a helpful timeline, showing “Cultural Events” along the left side and “U2’s Career” on the right, Neufeld guides the reader through a quick tour of the band’s history. In telling the story, he draws on other well-known sources, especially U2 by U2 (2006) and Bono: In Conversation with Michka Assayas (2005), but also many other book chapters and interviews spanning U2’s career. Each chapter looks, in chronological order, at a phase of U2’s development.

I particularly enjoyed the first chapter, “Growing Up in Ireland,” in which Neufeld explains the historical background in Ireland that led to the decades-long Troubles, which so colored the lives of U2’s members. In just a few pages, he does a fine job of setting up the Dublin of U2’s youth, helping the reader understand the questions the band members struggled with as they became U2.

The final two chapters of the book look at broader themes that resonate throughout U2’s history. These two chapters read as individual essays, distinct from the narrative flow of the rest of the book. In chapter 7, “Faith and Art,” I appreciated how Neufeld showed faith to be not a static identity that a person either has or doesn’t have. Rather, faith is dynamic, a kind of companion that accompanies a person throughout his or her journey. This is evident in the overview of ways that U2’s faith has informed their activity. That those activities have changed over time demonstrates the difficulty in grasping what a living faith really is. Chapter 8, “Social Engagement,” also shows U2’s journey, in relation to political activism and dreams of a better world. The shock at the injustice in the world, evident in U2’s words and actions in the 1980s, has matured into a quieter, but still intense, way of realizing the ideals the band members have never left behind.

From the book’s title, I had assumed that more of the book would take the approach of these last chapters and examine the “world changing” ways of U2. Though the retelling of the band’s story is good, I was expecting a deeper level of analysis of the band and their interaction with the world through their skillful use of the authority their celebrity gives them. Neufeld suggests many avenues with great potential for future writing about U2, and I look forward to the ways other authors will dig still deeper. I wonder, for example, how a political scientist might investigate Bono’s leadership in global debt-reduction; or how a sociologist would analyze the context of the Zoo TV tour and its construction of community amidst contradictions and irony; or how an economist would reflect on the effect a U2 tour has on a city or nation? These are big topics that come up in any retelling of U2’s story, and I often wish that some of those points would be further teased out by specialist who might see things that we’re missing.

Neufeld’s writing style is accessible and free of jargon; the book doesn’t presume any previous knowledge of U2’s history. For me, however, the tone of the writing was at times too general — for example, saying that “As the calendar turned from one decade to another, the world was an anxious place” (70) is too quick and ambiguous a way to describe the global context which U2 attempted to engage. And, when Neufeld talks about an uncomfortable moment of the Zoo TV tour, when a satellite linkup brought war-traumatized Sarajevans to the concert’s video screens, it seems wrongly abrupt to write, “It was an intense and awkward incident, leaving Larry to believe that the band might be guilty of exploiting Sarajevans for the sake of entertainment. Many people outside the U2 franchise felt the same” (83), but then leave it there and move on to the next part of U2’s story. I was looking for more than simply the facts as they happened; I also wanted some commentary to help me process it all.

For newer U2 fans who want to learn more about the band’s story, it can be confusing to decide which book to read first. If you are interested in U2 and haven’t yet read U2 by U2, then that book should be at the top of your list. Relatively new fans would do well to read U2: Rock ‘n’ Roll to Change the World next. I hope some of those fans will then respond to Neufeld’s implicit invitation to keep filling in the spaces, to help us enjoy and understand U2 from a wide variety of perspectives.

U2: Rock ‘n’ Roll to Change the World is available from Rowman & Littlefield and Amazon.