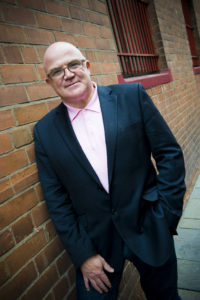 “Holy Wars And Northern Stars: U2 and Conflict In Ireland”

Stuart Bailie is a music writer and broadcaster based in Belfast. He has been a music industry professional for 30 years, writing for NME, Mojo, Uncut, Q,  The Times, The Irish Times, The Irish Independent, Classic Rock, Music Week, Belfast Telegraph and Hot Press.

He has written U2 cover stories for NME, The Sunday Times Culture and Alternative Ulster and has covered the band for many more publications. He wrote the sleeve notes to the U2 Go Home: Live from Slane Castle DVD and was Associate Producer of a BBC Radio 2 documentary on U2 in 2001.

In his feature on U2 for NME in 1992, while discussing with Bono the contradictions implicit in rock ‘n’ roll, he mentioned to Bono that William Blake’s poem “The Marriage of Heaven and Hell” tries to reconcile similar contradictions. He then heard Bono reply, “I know. I’ve just written a song for our next record called ‘Songs of Innocence and Experience,’ after reading Blake,” making Bailie quite possibly the first person outside of U2 to know – in 1992 – that U2 was planning to release music inspired by Blake’s poems Songs of Innocence and Experience. (Thanks to Dirk Rüpke at u2tour.de for bringing this to our attention.)

Bailie lived in London for 11 years and was Assistant Editor of NME from 1993-1996. He also wrote sleeve notes for Clannad, Nanci Griffith, Steve Earle and The Waterboys. He wrote the authorized story of Thin Lizzy, The Ballad Of The Thin Man, in 1997. He was the writer and narrator of Still In Love With You: The Gary Moore Story (BBC TV, 2011). He was the author, originator and narrator of So Hard To Beat, a two-part documentary on the story of music from Northern Ireland. (BBC TV, 2007), and a scriptwriter for BBC Radio 2 documentaries on U2, Glen Campbell, Thin Lizzy and Elvis Costello.

Bailie wrote the Arts Council of Northern Ireland’s essay on popular music, A Troubles Archive Essay and is currently writing a book about music and conflict in Northern Ireland, to be released in 2018. He blogs at www.digwithit.com.