By calhouns on September 7, 2017 in Review / Call For Review 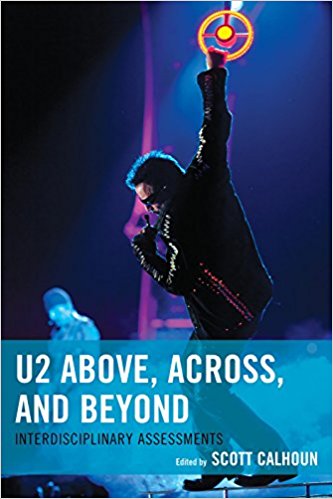 It’s one thing to say a favorite band has fallen off your radar after a certain point in their career. Maybe there was some peculiar album you didn’t care for, some phase where the group decided to “experiment” or “evolve.”

But it’s quite another thing—a personal thing—to insist a band has lost its way. After all, it’s their way to “lose,” right? Isn’t that the nature of art?

So it is with U2, an act we couldn’t get enough of in the late ‘80s and early ‘90s—but whose last two studio albums barely blipped on our radar screens (notwithstanding all the “free album” iTunes hubbub for Songs of Innocence).

The band members would probably tell you they grew, they matured: They evolved from the spirit-driven, punk-inspired Dublin quartet they once were into open-minded uber-rockers who recognized that the world was their stage. But we also grew, and the ‘90s and ‘00s flooded our free time with other exciting music worthy not only of rocking out to, but evaluating with critical ears.

We were in junior high when The Unforgettable Fire lit up our senses—kids without a care in the world, save the ones Bono deemed worthy of singing about. Twenty years on, we’re all married people with fancy college degrees and fulltime jobs, mortgages, and kids. So any singers and guitarists vying for what little attention we have left these days had better be on point.

Bono and the boys succeeded with 2000’s All That You Can’t Leave Behind, which proved a welcome return to the band’s jangly, intimate guitar rock of old. But they started losing me again with How to Build an Atomic Bomb (2005). So much so that I didn’t even pick up No Line on the Horizon (2009) until weeks after its release, only to discover none of it clicked with me.

Still, we’d be the last to level a finger at U2 and accuse them of letting us down, right? Were you sometimes disappointed by their changes in direction? Disinterested in some of their post-millennial music? Sure. Maybe you just haven’t given their last two albums much of a chance, and that—if anything—you’re secretly pleased the band continues to test its boundaries, planting its heels in untrodden musical territory instead of revisiting the well-worn paths.

That’s the nature—the essence—of art. Love it or hate it (or both), the music of U2 has always forced listeners to reckon with it.

Plenty of reckoning was done at the 2013 U2 Conference in Cleveland, Ohio. Held in conjunction with the Rock and Roll Hall of Fame (whose Director of Education Jason Hanley participated in panel discussions), the gathering invited fans and academics alike to consider (and reconsider) the legendary Irish band’s contributions to rock, to pop culture…to global consciousness.

Conference Director (and Cedarville University Professor of Literature) Scott Calhoun encouraged conference attendees to reassess the myriad ways Bono and his band have impacted or otherwise influenced the cultural Zeitgeist with their music, their message, even their (ever-changing) image.  The results of that open challenge—presented at the conference, and now available in the aggregate on Rowman and Littlefield’s Lexington imprint—is a new book “U2: Above, Across, and Beyond.”

As is the norm with a Lexington publication, Above, Across is less a fan book than it is a college-worthy appreciation of its subject.  Specifically, it is an octet of eight separate essays (or Interdisciplinary Assessments) scrutinizing various aspects of U2’s mostly-impressive oeuvre, and whose topics are thematically bound by Calhoun’s edict to thrust the transitive qualities of the band’s work under the microscope.

Put another way, these writers walked “Where the Streets Have No Name” to help find what Bono was looking for, what we listeners found, and what remains lost (whether deliberately or not) in the ether of U2-dom.

And that the authors do, with varying degrees of success—but with a common, undeniable passion for their subject.

Welshman Christopher Wales (NLA University College) tackles the group’s “Collaborative Transactions” by studying how U2 have enacted its art and interacted with its fan-base over the years in a communion of what social psychologist called “sensemaking” and “sensegiving.”  Drawing on the tumultuous (but invigorating) 1990 recording sessions for “One” at Hansa Studios in Berlin—as well as the Davis Guggenheim documentaries It Might Get Loud (2008) and From the Sky Down (2012)—Wales suggests that the whole of the band is indeed greater than the sum of its parts, that “the hats” (Bono and The Edge) and “haircuts” (Larry Mullen and Adam Clayton) carry one another through the creative process so as to realign themselves and reinvent their sound (and appearance).

In “Trans-valuing Adam Clayton” Rock Hall research assistant (and musicology Ph.D. candidate) Brian F. Wright argues why Clayton’s role in U2 is far more critical than the bassist’s naysayers would it.  While Wright agrees Clayton probably derived his propulsive, root-note style from so-called “unskilled” punks like The Ramones, Sex Pistols, and Joy Division, he argues that Clayton’s preference for simplicity is both conscious and creative.  Dissecting the bass lines for three key U2 cuts (“With or Without You,” “New Year’s Day,” and “Beautiful Day”), Wright makes a case for the “active” quality of the bassist’s rhythms and its tendency to lend movement to the songs, whether said lines be in the forefront (“New Year’s Day”) or background, as subtle support mechanism for Edge’s textural guitar meanderings (“Beautiful Day”).

Heck, Wright even provides sheet music (and tablature) for the songs, should you care to grab your four-string and have a go.  Cleveland rocks!

RMIT University lecturer (and club culture enthusiast) Ed Montano uses his “Translating Genres” article to discuss how U2 “replaced its 1980s monochromatic aura of sincerity with a 1990s multicolor façade of irony” on Achtung, Baby(1991), Zooropa (1993), and Pop (1997) by incorporating elements of the EDM (electronic dance music) so prevalent in clubs.  Pointing at songs like “Lemon,” “Mofo,” “Discotheque,” and “Daddy’s Gonna Pay for Your Crashed Car,” Montano explains how Bono and company drew from disco (Studio 54), techno, and acid house (The Hacienda) and collaborated with (or mimicked) D.J.s like Howie B. and Paul Oakenfold to bring a fresh, danceable color palette to its work.  More importantly, Montano mulls over the significance of EDM in the balance between the group’s “gender” (masculine rock versus female EDM) and the musicians’ deliberate efforts to lampoon themselves (authenticity versus inauthenticity).

In “A Transcendent Desire” scribe Arlan Elizabeth Hess (Vermont College of Fine Arts, University of Padua) gets sidetracked debating the “Irishness” of U2 by her own (however noble) attempt to counterbalance critical homophobia aimed at other emerald isle artists, like drag queen Panti Bliss (Rory O’Neill).  Hess—an expert on Irish lit and “the Troubles”—is most effective when debunking John Waters (Race of Angels) claims that Irish-ness has more to do with one’s reaction to an historic oppression (colonization) than anything else—including one’s birthplace.

“For Waters, it follows that Zoo TV was the result of centuries of exceptional Irish leadership, struggle, and adaptation,” she poses.

English professor Fred Johnson (Whitworth University) plays archeologist in U2’s “Transmedia Storyworld” by excavating the bits and pieces of ephemera (albums, movies, books) U2 have produced over the last three decades.  Not a morsel was arbitrarily dispatched, argues Johnson—for while the songs and photos may have derived from an organic, genuinely artistic source, the members of U2 enjoy final say on what goes out into the world.  In other words, the band has created its own story—its own wunderkammer—(and continues to do so), carefully selecting which stuff (and how much of it) is put out into the world for mass consumption, depending on what its goals are at the time.

“The glittery trapping of the Zoo TV tour was clearly put on, an obvious performance,” surmises Johnson.  “Yet they were a performance that the simulacrum band of the ‘80s would never have approved.”

In “Transmitting Memories” Flinders University senior lecturer Steve Taylor sifts through Bono’s in-concert “lyrical departures” from the recorded versions of key tracks to arrive at an understanding of how the band memorializes people, places, and events during performances—thereby manufacturing unique new moments for the ticketholders in attendance.  Spring-boarding from his discovery of a shout-out to the thirteen-years-dead Frank Sinatra in a live version of “Until the End of the World,” Taylor comments upon Bono’s many mentions of past concerts, prior locations…and dead people (Eunice Shriver, Greg Carroll, buried miners in New Zealand) from the stage, and how these seemingly unscripted one-liners establish both an oral history of the band and a “collective memory” for concert audiences.

“What would motivate such changes?” Taylor ponders.

Calendrical repetition, verbal repetition, and gestural repetition conspire upon U2’s gargantuan stages, weaving a ritualistic tapestry the band tosses over audiences like a playful papa blinding a laughing toddler with her “woobie.”  There’s more than meets the eye when Bono waves at Larry behind the drums, thrusts a finger in the air, or points his microphone at fans in the front row.  These are “concert-rical” connections that make each show special and enhance the universal appeal of each tour after the fact.

Remember Bono’s white flag at Red Rocks (Under a Blood Red Sky), or how he danced with a girl from the audience at Live Aid?  These small, spontaneous gestures mean a lot in the long run, says Taylor, establishing a fascinating “fixity” to how we recollect what the band has done.

We first saw U2 at Cleveland Municipal Stadium in October 1987 (on the third leg of The Joshua Tree tour). And it wasa transformative and magical concert—rife with ritual, studded with signature moments and yes, brimming with bricolage “now part of the toolbox of found objects that the band can employ in the future,” as Hamilton puts it.  The show did feel intimate, but we’re guessing that had more to do with our companions (and the booze) than anything the band was doing visually (we’re assuming it was U2; we couldn’t actually see Bono [and his broken arm] from the nosebleeds, and this was before the age of the Jumbo Tron).  They could’ve piped in a recording from some a previous show on the tour and thrown a lookalike band up there, and we wouldn’t have been the wiser.

But that’s just nitpicking—and from some thirty year on, no less.  We take Hamilton’s meaning, and will make it a point to pick up “U2 360 at The Rose Bowl” DVD as suggested.

Above, Across, and Beyond may tickle a few nostalgia tendrils, but it’s neither fanzine nor officially-sanctioned scrapbook.  This is heady stuff written by individuals who’ve given serious thought to U2’s “missteps, disappointments, failures…and ordinary problems.”  There are no glossy pictures of the group, young or old (there are no photos at all).  But there is ample (and stimulating) intellectual discussion of the Irish band’s “proclivity for change” in a world that doesn’t always welcome it.  And each of the eight articles (none longer than thirty pages) makes for an easy-to-digest, hour-long patch of premiere rock and roll reading.

“U2:  Above, Across, and Beyond—Interdisciplinary Assessments” on Amazon or order directly from the publisher by clicking here, then catch U2 on their Joshua Tree 30th Anniversary Tour.

U2 and Music Theory Series Debuted on @U2.com
New Entries in the U2 Studies Bibliography