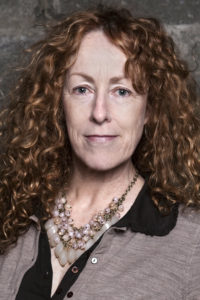 “Vision Into Visibility: How PopMart’s LED Technology Changed the Story”

Catherine Owens is an Irish artist living and working in New York City. Her work is largely installation based, originating from ideas that evolve through drawings, painting, sculpture, photography, film, video, sound and virtual reality.

As well as her own solo art practice Owens is known for her collaborative work with U2. As creative director of screen imagery for animation, film and video, she created visual content for five U2 world tours from 1992 – 2010, from ZooTV to U2360°.

She directed and was a producer on the first digital 3D film (U23D) made for Imax theatrical release in 2008. Shot in South America, its creation spearheaded a series of major technological breakthroughs in 3D filmmaking. The New York Times hailed it as “The first IMAX movie that deserves to be called a work of art.”

Using the technical and production knowledge gained while collaborating on large scale global projects over the last 20 years, Owens has incorporated this information into her current work, creating a series of LED based light works that seamlessly bring technology and mark making together.

In November 2017 she will exhibit a series of new LED light based Triptych painting and a 360° soundscape at Kustera Projects in Red Hook Brooklyn.

Other collaborative projects include directing visual content and animation for the San Francisco based group Kronos Quartet and for the Chinese Pipa player Wu Man, whose Carnegie Hall debut featured an intricate 20-minute animation composed of watercolor paintings.

Owens has attended four Lincoln Center Director’s Labs in New York as a guest artist and was a keynote speaker at SIGGRAPH in 2008, where she spoke about working in 3D under the title; Giving Technology Emotion: From the Artist’s Mind to U23D.

In April 2010 she traveled to India to make a 3D documentary about Kumbh Mela, the largest spiritual gathering in the world that takes place once every 12 years.

And in 2012 she shot her third 3D film project, a documentary on the Irish Dancer Colin Dunne – It was broadcast on the BSkyB 3D and the Sky Arts network in November 2012. The Theatrical version was launched at the Jameson Dublin Film Festival in February 2013.

In 2014 she launched “Field Prints” a set of prints representing impressions of the vistas found close to her studio in the Blackwater Valley, Co. Waterford, Ireland.

Owens has spoken widely about the interaction of Art and Technology, recently delivering speeches at the ‘VR On The Lot’ conference at Paramount Pictures, Los Angeles, ‘The Art Of VR” Sotheby’s, New York and INSPIREFEST, Dublin Ireland.