By calhouns on July 9, 2015 in Conference / Meeting, Speaking Event / Presentation

I’ve been looking forward to attending the Fandom and Religion Conference at the University of Leicester for months, and in a few more weeks I’ll be finally be there from July 28-30, taking in a great program of speakers and seminars, all organized by Dr. Clive Marsh as a part of the

Theology, Religion, and Popular Culture Network at U of Leicester. I’ll be learning from everyone on the program and surely I’ll strike up some new friendships; I’ll even be presenting a paper and chairing a session too.

As a major gathering of leading theorists, scholars, practitioners, and students, the conference will explore interactions between religion and popular culture. How does fandom work? What is happening to fans as they express their enthusiasms and allegiances? Has fandom replaced or become a form of religion? What can the study of religion learn from explorations of fandom?

I’ll be presenting Wednesday, July 29, in a session with two papers on U2. One will be from my colleague Dr. Chris Wales, of NLA Høgskolen, who presented at the 2013 U2 Conference and published “Collaborative Transactions: Making Sense (Again) for U2’s Achtung Baby” in U2 Above, Across, and Beyond (Lexington, 2014). Dr. Wales’ presentation is “F is for Fans … J is for Jesus: Making Sense of Bono’s Big Year.”

“Dressing like your sister / Living like a tart /
They don’t know what you’re doing / Babe it must be art / ….
They want you to play Jesus / They’ll go down on one knee /
But they’ll want their money back if you’re alive at 33 /
And you’re turning tricks / With your crucifix / You’re a star”

When Bono was 33 in 1993, he had already disappointed many of the devout U2 fans the band had acquired in the 1980s. Having taken to heart the Irish poet Brendan Kennelly’s Judas-haunted aphorism, “If you want to serve the age, betray it,” Bono had “tarted up” the persona he had developed in the previous decade for U2’s revolutionary Zoo TV tour, and he was well on his way to disappointing more fans in the future with a vigorous commitment to avoiding the trap of typecasting. Now at the un-messianic age of 55, Bono has become expert at attracting, exciting, and repelling the masses, forcing the fan-celebrity dynamic into an ever evolving process of redefinition as both he and U2’s fandom ages. Behold Bono! I will examine Bono’s public acts as a singer, performer, and advocate as they have become intertwined with his status as a rock star for what they reveal as running through the heart of U2 fandom when evaluated against some fans’ specific expectations of celebrity-leadership, particularly among those who identify as having strong religious commitments. Paradoxically, as Bono has successfully avoided typecasting, he has moved closer to archetypes, most obviously the rock star-humanitarian. But in light of Bono’s overarching role as an artist, and especially since he is self-identifying as an artist on U2’s current tour, I will argue for our attention to be focused on his arguably greater feat of successfully enacting a palate of multiple and contradictory types to become, himself, a work of art that resists easy, monological interpretation, eschewing fans’ singular devotion to himself. In doing so, he is not only closer to the archetypal artist fulfilling the archetypal function of art, but is, ironically, performing a primary role of the archetypal savior by reorienting the adoration of fans who would follow him and frustrating them into synthesizing an authentic, liberating fandom of their own, imbued with a more realized sense of self and a more realized sense of the other. Behold Bono indeed. He’s a star.

If you’re still awake and want a little more detail on my talk, as I conduct my examination and argument, I’ll cover these topics:

And finally, the session I’m chairing is music focused and looks great with these presentations:

I’d love to see you at the conference. You can register here.

By calhouns on June 16, 2015 in Speaking Event / Presentation

On June 5, 2015, I delivered the closing address for a gathering of the North American Association of Christians in Social Work (California chapter) at Fresno Pacific University. In my talk, “Social Justice and Pop Culture: U2 as a non-traditional Christian voice,” I suggest the thesis that “U2 models a non-traditional Christian witness by engaging the world — especially in areas of social concern — not by remaining isolated from it.” 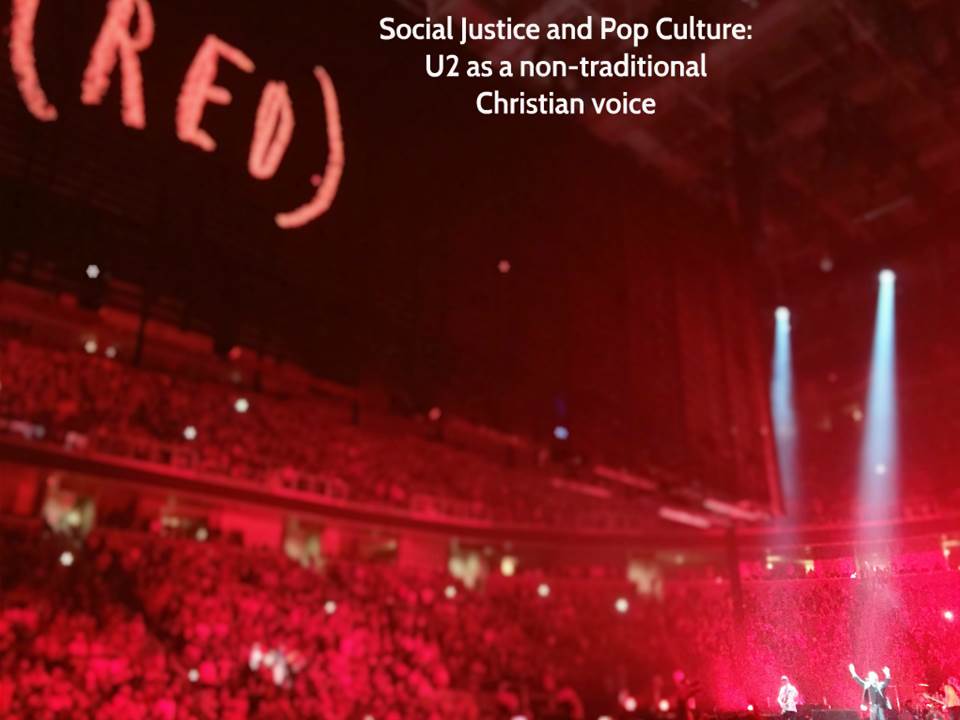 After giving a brief survey of Ireland, The Troubles and U2’s own adolescence, I address the changing social commentary that “Sunday Bloody Sunday” provides across four decades of live performances, including the dirge-like presentation on the current Innocence + Experience tour. I finish by reflecting on Bono’s own words about engagement with the culture, especially as faith prompts him to speak about social issues.

I captured a live Persicope stream of the presentation and edited in some of my visuals (including concert footage).